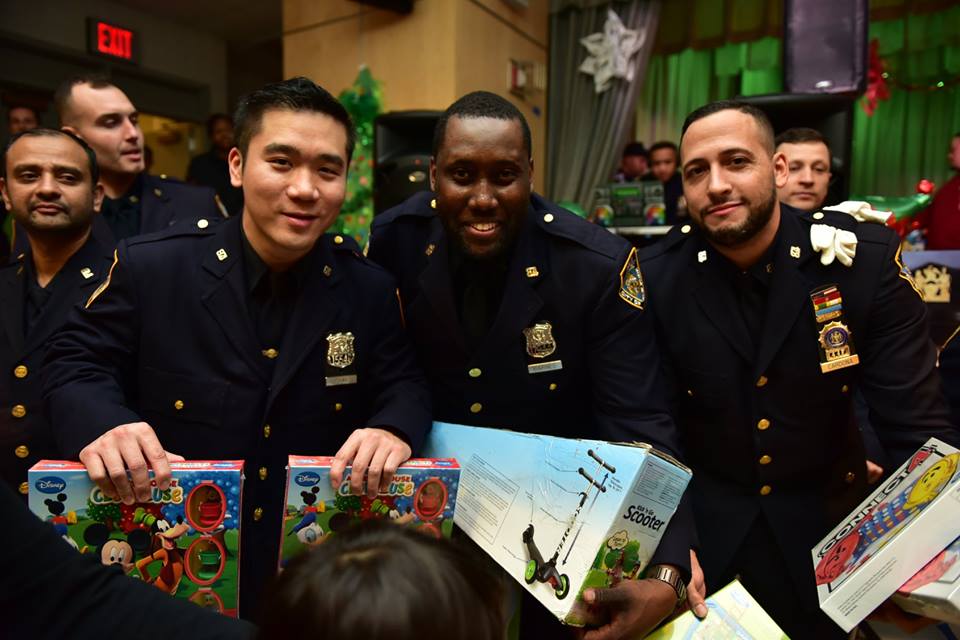 On Friday, December 21, 2018, The Detective Rafael Ramos Foundation's Second Annual Toy Giveaway was held at The Police Officer Ramos Suarez School in Ridgewood, NY. The school was renamed in 2005 for fallen NYPD hero Ramon Suarez who paid the ultimate sacrifice on September 11th. The toy giveaway was held in honor of the memory of fallen NYPD Detective Rafael Ramos and Detective Wenjain Lui.

Over 600 students from Kindergarten to Fifth grade gathered in the school's auditorium and were treated to a concert by The NYPD Jazz band, along with lots of singing, dancing, face painting and games. There were special appearances by NYPD's favorite twins, Aaron and Evan, Mrs. Clause, Santa's elves and the star of the show, Santa himself. NYPD officers from the 104 Precinct, United States Marine Corp. officers, family members of fallen heros and supporters distrubuted toys to all the enthusiastic children.

Mrs. Martiza Ramos, President of The Detective Rafael Ramos Foundation and wife of Rafael addressed the children and spoke of the foundation's mission of bringing the community and policing together and the importance of keeping his legacy alive. When speaking of her husband and the accomplishments of the foundation, Martiza said "I'm sure he's smiling down from heaven as he sees this."

A special thanks to everyone who made this day possible from Principal Dzwonek, to all the teachers, school staff, family, friends, volunteers, The NYPD, The USMC and all the sponsors. Thank you for your endless support to make the day possible for the students of The Ramon Suarez School.